8 Things You Should Know About Full-Spectrum Cannabis Oil

In its raw form, each cannabis cultivar has its own unique cannabinoid and terpene profile that, among other compounds, contribute to their therapeutic effects. These compounds are created within the plant’s lipid and fat-based trichomes. A full-spectrum extract is a type of cannabis concentrate that aims to capture all of the therapeutic compounds of the raw cannabis plant at the moment that it was processed, without the lipids and fats that hold those compounds together but do not have medicinal benefits.

The goal of a full-spectrum extract is to capture all of the available compounds from the trichomes without altering them, leaving behind the undesirable fats, waxes, and lipids that hold the desirable compounds together.

One of the most important features of a full-spectrum cannabis extraction is that it preserves the nature of the extracted compounds. The acidic forms of cannabinoids found in the plant (THCA, CBDA, CBGA) are not decarboxylated in the process. 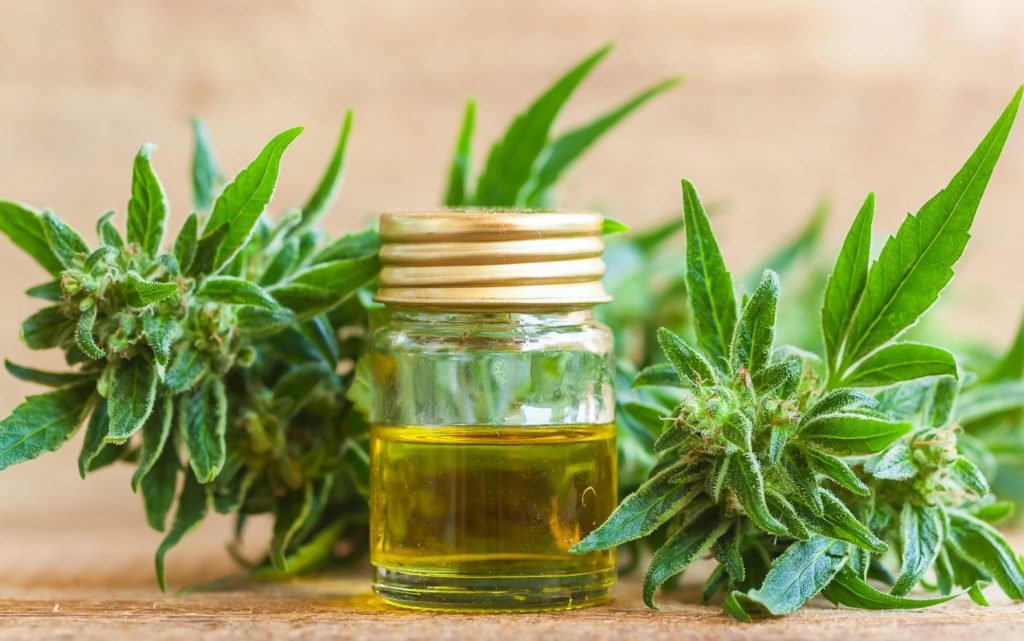 Decarboxylation is when a compound loses carbon atoms and releases carbon dioxide, either by heat or prolonged overexposure to environmental stress. THCA, for example, does not produce intoxicating effects until it is decarboxylated into the active compound THC. Acidic cannabinoids may decarboxylate into neutral forms on their own, however, depending on the conditions of drying and storage processes. Acidic cannabinoids may offer therapeutic benefits that differ from that of their neutral counterparts, so users may not want to use extracts that have been decarboxylated.

A cannabis concentrate produced that preserves the full cannabinoid and terpene contents of the raw cannabis plant. The goal of a full-spectrum extract is to maintain the complex range of desirable compounds in a cannabis plant without altering them through decarboxylation or oxidation. Full Spectrum Cannabis Oil (FSCO) and Full Extract Cannabis Oil (FECO) are common designations synonymous with full spectrum extract. Popular extracts that may be considered full spectrum include sauce, live resin, High Terpene Full Spectrum Extract (HTFSE), and High Cannabinoid Full Spectrum Extract (HCFSE).

Although there is a lot of talk these days over the therapeutic benefits of marijuana’s non-intoxicating compound cannabidiol (CBD), the truth is some of the best medicine derived from the cannabis plant includes all of its components. There are so many combinations of cannabinoids, terpenes and other less popularized elements that make whole-plant therapy the only way to get the most from this medicine.

Believe it or not, CBD (cannabidiol) and THC (tetrahydrocannabinol) are just one of 100+ cannabinoids that have been identified in the Cannabis sativa L plant. You can learn more about the difference between CBD and THC here. Full-spectrum cannabis oil includes most of these cannabinoids, while CBD and THC isolate oil contains only the isolated CBD and THC compound.

When it comes to cannabis extracts, the term “full-spectrum” is an important one to remember. Normal extractions are known to sift out certain components, which can leave the finished product missing the depth present while in plant form. So a customer might get his or her hands on some highly potent shatter, which can have well over 50 percent THC, only to lose flavor and other crucial aspects. In the world of full-spectrum extracts, the chemist works to bring the plant’s exact profile to the resin. In fact, research has shown that cannabinoids “working together” are more effective than cannabinoids working by themselves. This phenomenon is known as the entourage effect.

This term is used to describe the highly beneficial synergistic relationship that different cannabinoids, terpenes, and other compounds have when combined. These compounds have a greater medicinal effect when used in conjunction. 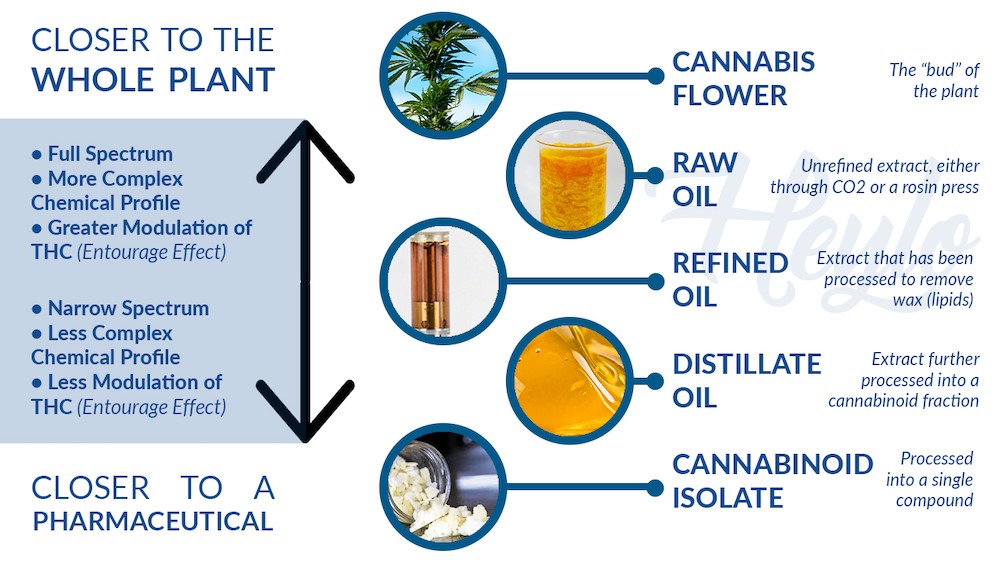 While most readers are probably aware of the impact THC and CBD can have on their health, there are “lesser-known” cannabinoids that may also provide therapeutic benefit. When checking the lab report for a quality full-spectrum CBD oil, you may see some of the following cannabinoids:

High-quality full-spectrum CBD oils are not limited to phytocannabinoid content, however. Quality, well-grown hemp contains an assortment of additional ingredients, each with their own benefit.

4. The Function of “Other Cannabinoids” in Full-Spectrum Cannabis Oil

There have been publications suggesting therapeutic benefits of compounds other than CBD and THC:

Cannabigerol (CBG): Known as the ‘stem cell’ cannabinoid, CBG is transformed into CBD (and to a lesser extent THC) via chemical processes. As a result, most end-user CBD oils have low levels of CBG.

Cannabinol (CBN): The degradation of THC leads to CBN. While there is usually a low amount of it in the fresh plant, decarboxylation typically raises the level of CBN. It offers a slight psychoactive effect, and is believed to have a greater affinity for CB2 receptors compared to CB1 receptors.

Cannabichromene (CBC): This is probably the least studied cannabinoid – even though it is rather abundant in certain marijuana strains. There simply isn’t enough data available to suggest it offers isolated therapeutic benefits.

In addition to a “full inclusion” of cannabinoids, full spectrum oils contain an assortment of other beneficial plant-based ingredients. These ingredients may include:

Each cultivar, or cultivated variety of the cannabis plant, produces a unique chemical profile — the production and expression of which is greatly influenced by environment. Terpene content is strongly inherited, for example, while the total terpene yield per weight of plant tissue is much more dependent on environmental factors. Each unique chemical profile makes up the unique spectrum offered by a given cultivar. That’s why it’s possible for two plants of the same cultivar to have differing chemical profiles, especially when subjected to different environmental stresses during cultivation.

Terpenes are chemicals that give the cannabis plant its unique scent. Even in small amounts, terpenes are believed to work synergistically with cannabinoids to heal the body.

Here are some well-known terpenes that may be found in full-spectrum oils:

Limonene: A stress reliever that is believed to help boost mood. May also assist with gastric issues.

Linalool: Has a sedative effect and may work to help patients with depression, insomnia, and stress.

Caryophyllene: An antioxidant and anti-inflammatory. May help relieve the symptoms of pain and insomnia.

Humulene: Has antibacterial properties and may work as an appetite suppressant.

6. How the Spectrum Changes During Cultivation and After Harvest

The cannabis plant will produce an ever-evolving set of compounds while the plant is growing. Cannabinoids and terpenes are produced in the trichome through biosynthesis, in which enzymes catalyze a series of chemical reactions to produce complex molecules from simple (smaller) molecules. Think of enzymes as tiny biological machines that use chemical energy rather than mechanical energy to build structures — namely terpenes and acidic cannabinoids.

These compounds begin to change once the plant is harvested, altering the spectrum of available compounds. Terpenes, for example, are either oxidized and become terpenoids or can be lost during the drying process. When cannabis is dried and cured, terpene atoms are oxidized, and the terpene becomes a terpenoid.

Say you harvest a Sour Diesel plant and split it into two halves. You flash-freeze the first half to preserve all of the compounds that were available at the moment of harvest. This will ensure that none of the temperature-sensitive terpenes is lost. The second half, you dry and cure using traditional drying methods.

During this process, we lose some of the terpenes, and what’s left will most likely be altered by oxygen to some extent.

At this point, both halves have a different spectrum of compounds ready to be extracted. If an extractor were to successfully remove all compounds from each half, both could be labeled a full-spectrum extract, even though they don’t have the same available spectrum.

The spectrum of available compounds will vary greatly from cultivar to cultivar, and its chemical makeup will largely depend on when it was extracted from the plant. Both genetic and environmental factors are fully at play in creating the spectrum of compounds ultimately expressed by any given cultivar.

One of the most important studies relating to full-spectrum CBD oil took place at the Hebrew University of Jerusalem in 2015. It compared the performance of a full-spectrum cannabis extract with one that contained CBD only. The study concluded that, in mice, the full spectrum extract was more effective for pain and inflammation. In fact, scientists claimed that the whole plant cannabis extract was “ideal for clinical uses” as compared to isolated CBD.

In other words, while “pure CBD” can be effective, it appears that full-spectrum extract is preferable for therapeutic purposes. And indeed, there has been scientific validation to back this up.

The aforementioned entourage effect helps to explain the efficacy of whole plant cannabis extracts. As we mentioned, there are over 100 identified cannabinoids in the Cannabis sativa L plant. When in the presence of one another, these cannabinoids appear to combine synergistically to enhance physiologic effects.

In a January 2019 publication, Dr. Ethan Russo suggested that “one molecule [i.e. CBD] is unlikely to match the therapeutic potential of Cannabis itself as a phytochemical factory.” Among many other things, whole-plant cannabis extract has been shown to provide positive therapeutic benefit on the following conditions:

Anxiety Disorders: THC has widely been known to induce symptoms of anxiety. Full-spectrum CBD is known to counteract the effects of THC, which may help alleviate symptoms stemming from stress, PTSD, and chronic anxiety.

Neurological Disorders: Cannabis extract has shown to help in the treatment of Parkinson’s disease, Alzheimer’s disease, and more.

Although pure, isolated CBD and THC  has its advantages, most would agree that full-spectrum cannabis oil offers a superior therapeutic benefit. In addition to the CBD and THC compounds, full-spectrum tinctures contain dozens of other cannabinoids and terpenes. In the presence of one another, these ingredients combine to produce a synergistic effect that is greater than the effect of a single ingredient by itself.

Full-spectrum cannabis oil has been known to help relieve pain, reduce stress, and help improve sleep patterns. On a more general level, it is also thought to improve homeostatic balance by keeping your body strong, fit, and healthy.

We currently carry full spectrum CBD oils online for sale. If you have any questions or inquiries about this please do not hesitate to contact our support staff.

About the Author: Melanie Adams